LO, he comes with clouds descending,

once for favoured sinners slain;

swell the triumph of his train:

God appears on earth to reign.

‘Advent’ (Latin, adventus) means ‘coming’. For centuries, Christians have observed a season of preparation for Christmas, the celebration of the birth of Jesus. It is a solemn season, but by no means sad. It is characterised by a sense of joyful expectation as we anticipate the second coming of Christ, as well as remembering his first coming. (From the inside of our church service booklet)

Our sermon this Advent Sunday was, unsurprisingly, all about watching and waiting for Jesus’ coming, both as a baby born in a cattle stall and as the Judge, coming on clouds descending. It is the latter that has particularly caught my attention this year. The preacher laboured those terms. Watching. Waiting. In the run up to Christmas, I’ve found I so easily get distracted by all the tat that I’ve often missed the point of Advent. I can’t shake off some of Jesus’ words from our Gospel reading this morning. ‘Be on guard! Be alert! You do not know when that time will come … What I say to you, I say to everyone: “Watch!”‘ (Mark 13:33 and 37)

I find that lighting a candle aids meditation. It’s hardly a new idea, but I haven’t grown up in a tradition that heralds the merits of silence and contemplation, watching and waiting. This year, however, I’ve gone candle-tastic, and used it as an excuse to have some mother-daughter bonding time as she has taught me how to make Advent decorations. It’s also because I found myself with the slightly daunting task of making our church’s wreath, where one candle is lit each Sunday to symbolize the passage of the four weeks in Advent. I thought I’d share some of the fruits of my candle-inspired labours. (The church warden informed me how disastrous last year’s wreath was, and that I couldn’t possibly do any worse …)

I found inspiration in German and Dutch magazines – they’re everywhere over there. They told me everything I needed to buy: oasis, oasis trays, oasis fix, stub wire, candles, silver and gold spray. My mother then sent me out foraging in our local woods for tree ivy, holly, fir, and pine cones, that kind of thing. She brought a selection of other things that she’s collected over the years that can be sprayed like dried poppy heads, dried fruit, and so on. There’s no need to spend lots of money on expensive decorations in garden centres if you can spray your own, I have discovered! In the end we made a good number of decorations, which can be seen below.

I was informed that churches tend to like traditional foliage with not much glitz. This reflects the ‘solemn’ nature of Advent. Consequently, I avoided too much sparkle. I sprayed the tree ivy berries with the smallest amount of silver spray to give a hint of shimmer. Otherwise everything else is totally natural and collected from the local area – including the churchyard! (My mother also made a wreath for her church, and put me to shame! Hers is the second of the two.) 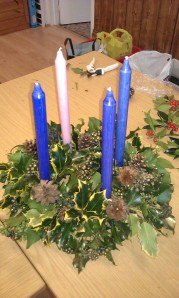 The stand was simple and metal and provided by the church. We then taped down four small dishes with oasis in (which were left over from our wedding and happened to fit) and added foliage. As a rule of thumb, cut off leaves about an inch from the bottom of the cutting, and put long stuff at the bottom, short stuff at the top. 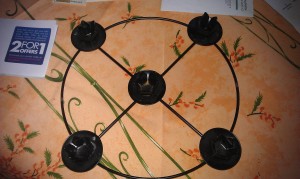 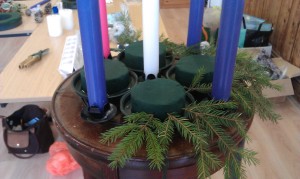 My sister-in-law decided to make a wreath as a table decoration involving large candles. You can stand them in oasis using stub wire heated by a hob flame, so that the wire more easily fits into the bottom of the candle without making it crumble. Large candles obviously mean that there’s not a lot of space for foliage. My sister-in-law wisely chose to make her decoration quite simply, and it is beautiful: 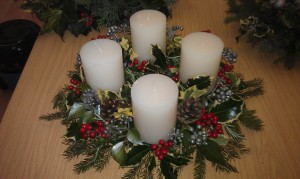 My decoration was different in that I used stump oasis and had long thin candles, which resulted in the slightly ‘exploded’ look, as much more foliage is needed to fill the oasis. The cinnamon sticks can be purchased cheaply from florists. Otherwise everything else in the decoration has been foraged and in some cases sprayed. I found that the candles are very difficult to keep straight! I might try wider candles next year.

I also wanted to make something for the door to our house, but didn’t have a lot of time to spend on it. Mum gave me an old bare wreath made up of wired twigs. I wove ivy round it and added a few red baubles: 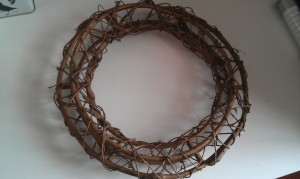 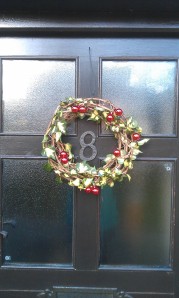 Last, I wanted to use the leftover foliage to make a stand for an Advent candle I’d bought in a Christian bookshop. For each of the days of December running up to Christmas day, there is a name or a characteristic of Jesus to meditate on. It reminded me a bit of the chorus of a song we sing on Quantock called ‘You are Holy’, where we recall many of the names we have for God. They are numbered as follows: 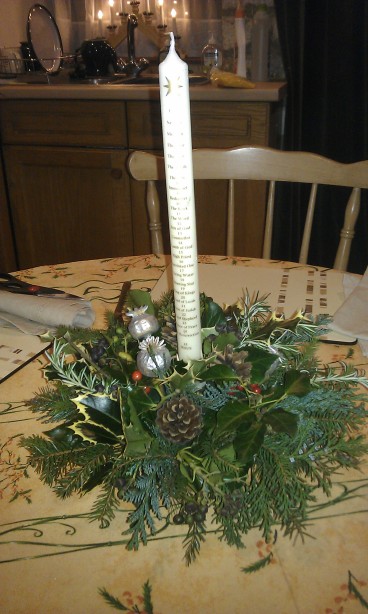 I hope and pray that lighting this candle each day of Advent will help me to become more aware of the many wonders of Jesus Christ our Lord.

Saviour, take the power and glory,

claim the kingdom for thine own:

Thou shalt reign, and thou alone.

First, a caveat: it was brought to my attention in my last post (‘Weird things that languages do #1: Ergativity‘) that the phenomenon in question wasn’t exactly ‘weird’ for people who speak ergative languages. This is true! What I mean by ‘weird’, of course, is more that the phenomena I describe are surprising for people who are only familiar with English (or perhaps Indo-European languages). This is quite true of today’s ‘weird thing’: the Antipassive construction.

In (1), Jane is the subject, the ball is the object. In (2), the ball is the subject, and Jane is a non-essential oblique (i.e. you can miss ‘by Jane’ out, hence the parentheses). This is easy enough to understand: the object ‘the ball’ in (1) has been promoted to the subject of (2). Importantly, the semantic roles have not changed. In both (1) and (2), Jane is the agent (i.e. she is deliberately performing the action). The ball is the theme (i.e. it undergoes the action but does not change its state). So what is happening is that the theme in (1), ‘the ball’ is an object, but in (2) it has been promoted to the subject. The agent is no longer necessary in (2), i.e. it is deletable.

This is because subjects are (usually) always marked nominative in languages like English. (Try replacing the nouns in (1) and (2) with pronouns, which do still show case marking in English.)

There has also been some change to the verb: ‘kicked’ in (1) has become ‘was kicked’ in (2). Some languages (e.g. Latin) show that a verb is passivized by verb morphology, rather than adding a new word (in English: an auxiliary). The word dicit in Latin means ‘he/she/it says’. Dicitur means ‘it is said’. In this case, the suffix -tur signals 3rd person present passive, whereas  the suffix -t in dicit signals 3rd person present active.

So, let’s get to the Antipassive construction: the sentence in (1) in an ergative language might look like this:

So, Jane, marked ergative, is the agent, and the ball, marked absolutive, is the patient. You will recall that this is the normal state of affairs in transitive sentences in ergative languages. In the corresponding Antipassive construction, it is the agent that is marked absolutive, and the patient is marked otherwise (sometimes ergative, sometimes in some other way, represented below by ‘X’), and the verb carries antipassive morphology:

(3) is hard for us to translate into English, as we don’t have an Antipassive construction. Since the semantic roles are the same, the (truth-conditional) meaning is probably the same as the normal transitive sentence ‘Jane kicked the ball.’ Wacky, eh?